These new rules aren't final and may be subject to change. Like what I did for the playtests for Chuhou Joutai, I can't simply create or impose whatever I want. I have to reflect players' feedback, so for those who don't like the new rules, we may have to change it again to better suit user preferences.

The past few days have been a bit of a ruckus. Ootwar was the one who started it. The problem was our business practices, and as a result, we had to mute the entire Discord server in order to investigate the situation. Once we found out what caused the ruckus we took the appropriate steps to be sure we are in full compliance with Wikia's Terms of Service, we had to update the Rules of Conduct.

To be clear, here are the changes we have made:

Keep in mind these changes are still in beta and are subject to change in the future.

I'm not doing anything wrong that breaches Wikia's Terms of Service.

That's apparently the last big movie of the year.

I always post these at midnight UTC. I always coordinate everything through UTC. 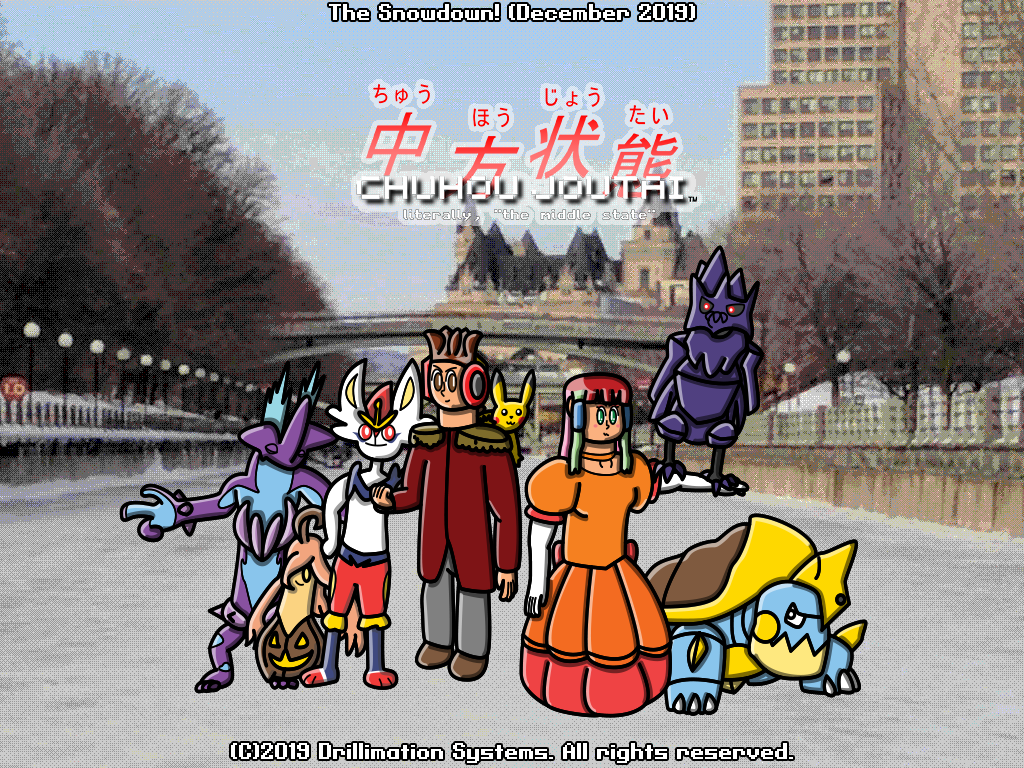 Oh my. I can't believe we made it to the end of yet another year, and another decade too! Got to-do lists filling up? We sure do, because in three weeks Kagami Ochiai's birthday on December 21 will mark the shortest day of the year in the Northern Hemisphere. Just look at what our neighbors in the Southern Hemisphere will be doing on their longest day of the year. Christmastime is here once again, so what are you going to get this holiday season?

But we have some important things to tell you as a way to help close out the year and decade:

We made some performance tweaks to Chuhou Joutai to ensure players have a much richer experience. In addition, we added a new feature before the beginning of a stage. The map screen will track where you are while playing the game in Arcade Mode. In addition, stage 8 is finally done. All I have left are the endings to program and the credits. After those are programmed, the game isn't still done yet. There will be a number of things I have to do during the post-production phase.

But say, if you haven't tried the demo yet, now is your chance! Just click the itch.io link below:

Today, I am going to a special Super Smash Bros. tournament called the Snowdown (as depicted in the card above). Also, I drew my team from Pokémon Sword and Shield, alongside the Chuhou Joutai duo in royal attire. Who was your starter? Mine was Scorbunny.

Blue91233 may be ready for bureaucrat on DFW

I'm saying it's official now. Jimmy4164 on Wikia is being demoted because of lack of activity. Until the bureaucrat rights are removed, we can't let Blue91233 become bureaucrat on the Dream Fiction Wiki yet.

The Game Awards is on December 12, and Super Smash Bros. Ultimate has received a Game of the Year nomination. We are expected another DLC fighter there too. Will it win? Some games that are releasing in December include:

I can't believe a saga is coming to an end, as Star Wars: The Rise of Skywalker is hitting theatres on December 20. Hope you look forward to that, and no spoilers please.

According to us, your account needs to be active on Wikia for at least four days. This was Chebbycraft's fault of causing this rule to be put in place.

Anyone can make pages! You don't have to ask. 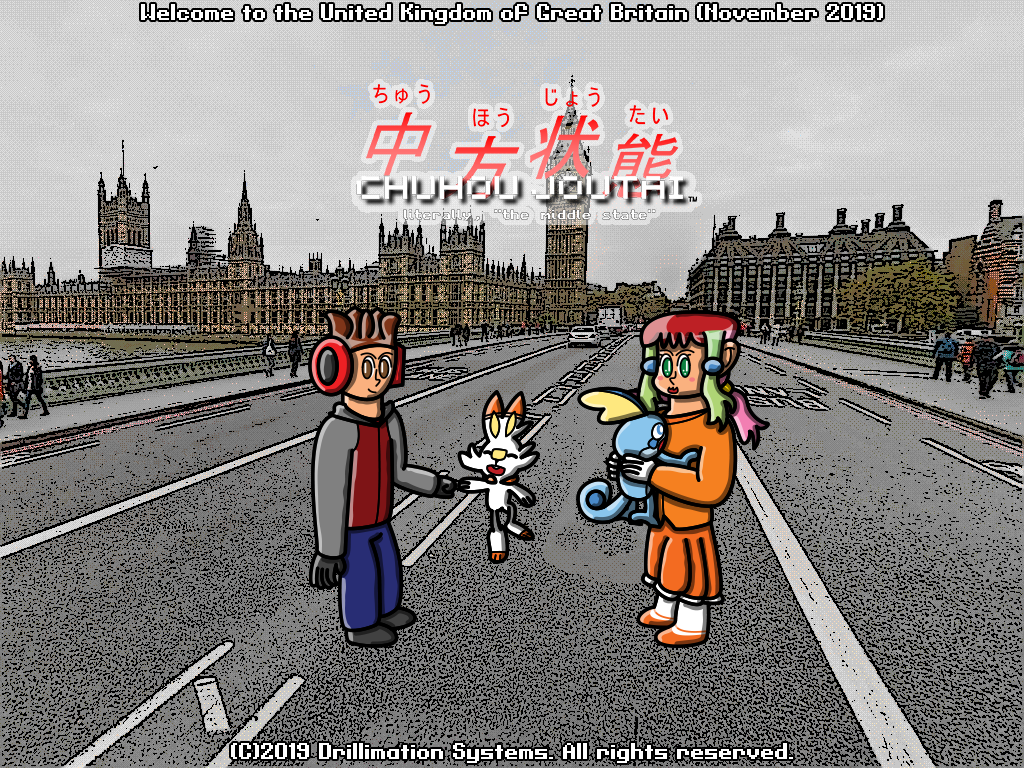 It's the day after Halloween and welcome to the United Kingdom, which is home to a million King Arthurs and Queen Victorias. As shown up in the card above, a new Pokémon adventure is coming to the Nintendo Switch. That being Pokémon Sword and Shield, it's time to go back to Europe to wield the power of a knight and become the one true king or queen of Britain! But the UK is not what we're here to talk about. We have some new features being rolled out.

Last week, we released a new update for Chuhou Joutai, and we have added a continue feature, which is something I wanted. We also addressed a few bugs in the game's multiplayer mode. So, if you want to play the new update, you can do so in the itch.io link below:

Chuhou Joutai is almost complete, I already began programming stage 7 and plan on getting it done by the end of November.

The New Wikia is Coming

As part of the Gamepedia merger, the Message Wall and Article Comments features will be dropped in favor of an entirely new system coming to Wikia. The new system is likely to come starting in November 2019 or early 2020. I don't know the exact date, so keep an eye on Wikia's Blog! These changes may be coming fast, so be prepared.

Article/User of the Month on DFW now on Discussions

The Article/User of the Month feature that has been a staple of the Dream Fiction Wiki since the beginning of this year will be moved to the discussions to avoid botting. In addition, any candidates that have been nominated cannot be nominated for the second time in a row.

I am sick and tired of Zonnie being an annoyance on Discord through the IM feature. If you tell him to just put it in the public chat on our Discord server, all he'll just say is "no because of Ootwar." To put that to rest, I have put him on a new list of staff members called the Auxiliary Staff List. These are users that are not staff members of the Dream Logos/Fiction Wiki but have staff rights (they can only be promoted up to moderator).

We haven't added any new features to the site lately.

No, I'm going in as Sans, because I have the clothes.

Uhh, there's only 30 days left until Halloween. Isn't it kinda odd to be saying that early?

We have one too many admins, so there will be no open slot. It'll be all balanced like DLW! 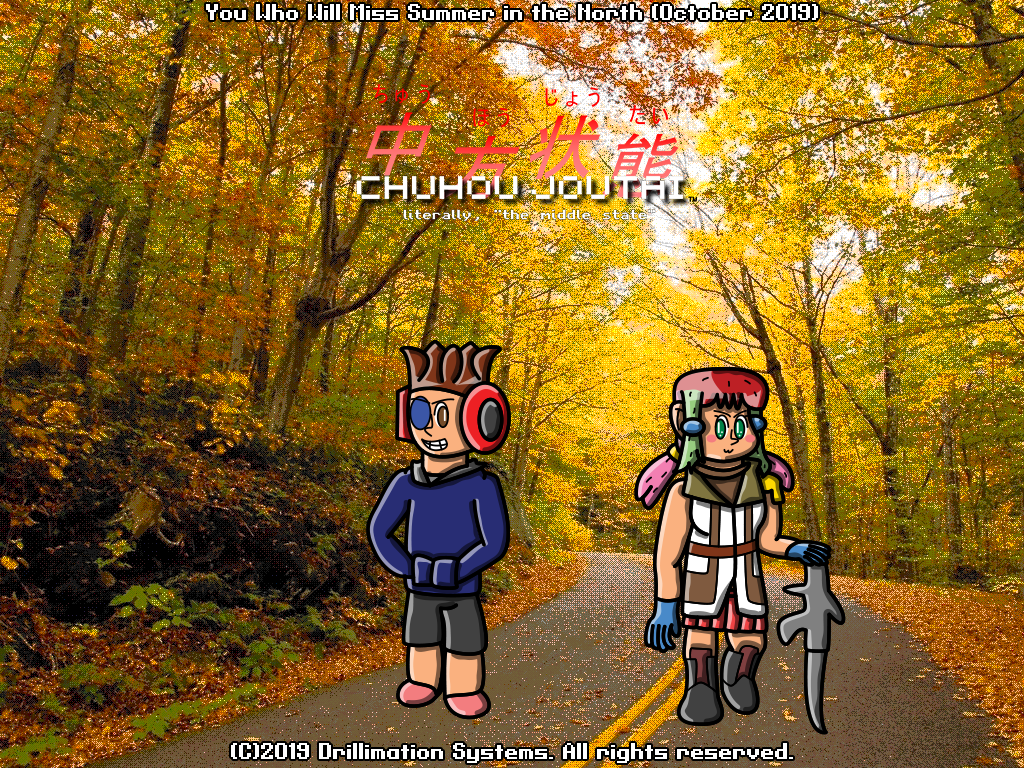 Time for Halloween again. Chuhou Joutai has once again been updated. The demo updates leading up to the game's release in May 2020 will never stop. But still, even those creepy Crimsonites keep getting radicalized and Fred Fawkes ordering Crimsonites to impersonate him. That's where the Ochiai Clan has to keep putting evil back to sleep. I'm cursed to keep making Monthly Update posts and often mentioning Chuhou Joutai. And yes, we will all miss summer until next year, unless you live in the Southern Hemisphere. So, who are you going to cosplay for Halloween this year? I'm going in as Sans, and my friends are gonna have a bad time.

We added full-screen mode, which was a popular request. But we also added another new feature: hi-res mode! What is it? It basically enlarges your screen to 1200x900 pixels. However, this will only work if your display height is 900 pixels or more. So, if you want to try Chuhou Joutai, you're in luck. See you in Kozankyo!

You can view the game on Itch.io here:

Jimmy4164 on Wikia on Dream Fiction Wiki could be demoted

I've been noticing that this user has been largely inactive lately. If he's not back by October 7, then he will be permanently demoted for lack of activity. I will also name Blue91233 his successor for an open bureaucrat slot and finally have the staff limit balanced.

UPDATE: It appeared to be Jimmy came back to the game on October 4, so the demotion could be delayed to November 4.

We have rolled out a new update for both the Dream Logos and Fiction Wikis. You can now rate articles, but a new nifty feature we added is links to userpages whose owner has been banned will now be striked out. Italics indicates permanently banned users. However, the polls for article and user of the month have been lowered to four candidates, previous polls have gone way to whack with the number of candidates.

We have a lot going on for games this month. Usually, the last quarter of a year is the biggest time for games, including:

Only two major films are coming, we have:

It's easy. Just click the gallery button while in the editor, or you can use <gallery>

For any page containing a space like that, use underscores.

How did that happen?